Welcome to the Contest Home Page

What is an Eisteddfod?

Eisteddfod's have existed since at least the 12th century, though many believe that the idea 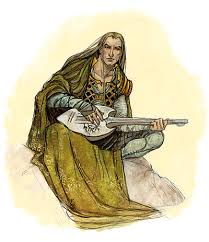 was based on an ancient practice of the early Celtic tribes of Britain, Ireland, Gaul etc. The term is Welsh and means a gathering of poets, storytellers and other performing artists. The first written record of one was that held by a Welsh prince, Rhys app Gruffydd, in 1176.

Though of Welsh origin, the term has now gone into general usage to describe any competitive festival of poetry and storytelling. Quite a number of towns and counties around Britain now hold annual Bardic Chairs, where poets and storytellers compete to see who will be crowned as the most talented. Examples include the Esethvos in Cornwall, the Peterborough Eisteddfod held at Flag Fen, and one held in Glastonbury.

Suffolk, being the Land of the South Folk, now has its own Skaldic Chair. A Bard was a Welsh poet-storyteller-seer, whilst a skald (also known by the Germanic term scop) was the Scandinavian equivalent. Whilst Suffolk formed part of the kingdom of the Angles, its royal family came from Sweden. Their first known ruler in this land was King Wehha, who ruled from CE 560.

Thus our gathering draws on both native British and Anglo-Saxon heritage, two cultures which would almost certainly have been fused at least amongst the peasantry. The seventh annual Eisteddfod to find the next Chief Skalds of Suffolk has, unfortunately, had to be postponed from its original date until - Saturday 10th February 2018 (venue TBC).

Congratulations go to the winning poet, Beverley Price, who set the theme of COUNTDOWN TO A LIFE CHANGING EVENT for the 2017 contest, whilst the winning storyteller, Rachel O'Leary, chose the theme of THE WILD WOOD. These themes remain in place for the postponed event, which will be MC-ed by Robin Herne and organised by Malcolm Busby, Rachel, and Robin.

Malcolm, Beverley and Rachel will form part of the Judging Panel for the two contests in 2018.

Details of who can enter and how to enter can be found on this website.

Matt Kimpton was a prominent Cambridge storyteller and the first person to win the Suffolk Skald contest. Sadly he died in early September of 2012. Matt was a remarkable teller, full of energy, dodgy Scottish accents, able to conjure vivid images, and hold an audience spellbound. An avid Doctor Who fan, Matt had contributed towards anthologies and would no doubt have gone on to become a leading light in the manner of Mark Gatiss given more time. Our sympathies go to his partner and family. The 2013 contest raised donations on behalf of the Cystic Fibrosis Trust, in memory of Matt.